Shout-outs were even given to specific local breweries including, Allagash, Maine Beer Company, Bissell Brothers, and a number of others.

Here is the scoop on what Matador Network had to say.

“With a population of just under 204,000, (greater Portland, that is), Portland is Maine’s largest city. However the fact that it’s small shouldn’t mean anything. Not only is it considered to have the most restaurants, per capita, than any other U.S. city, but it’s jam-packed with craft brewery operations and bars that support them.

When it comes to beer, there are the big players — Allagash and Maine Beer Company, to name the best — but there’s also quite a few of the little guys.Bissell Brothers, for instance, founded by Noah and Peter Bissell, has only been around since 2013, but their Substance Ale is on pretty much every tap in the Portland metro area and beyond. This is a city that welcomes people branching off on their own. And if you can brew a good beer, pretty much every bar in town wants to support you.

Novare Res is probably the most necessary place to start your beer tour of Portland. They’ve got all the local ones on 25 rotating taps, plus 500-plus bottles from around the world. From there, Oxbow, Rising Tide and Bunker all have tasting rooms within close reach of each other. There’s also, of course, the Maine Brew Bus, which you can hop on for as low as $55 per person and get taken to basically every place you need to worry about it when it comes to guzzling Maine beer. 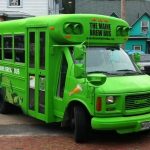 The Maine Brew Bus is an awesome way to test all the beer you want and leave the driving to someone else.  We see many of our guests heading out to catch the Maine Brew Bus as Maine Beer Company is less than 2 miles from us.  Looking for something to do while you wait for summer to arrive?  Try a beer tour through Portland, staying at James Place Inn and shopping afterward in Freeport.  A perfect weekend getaway!