Looking for a quick visit to the White Mountains, including a trip on the Cog Railway to the top of Mount Washington?  You will be glad you did! Clocking the worlds highest wind velocity at 231 mph, Mount Washington is the highest summit in the northeastern US at 6288 feet.

If your time in New England is limited, Freeport is a great outpost from which to do a one-day trip to the White Mountains.  We were fortunate enough to have a day off at the end of October (a rare mid-week occurrence) and decided to make a trip we had been wanting to do for quite some time.  What a great experience!

We set out from Freeport about 8am and took the back roads to New Hampshire (using 113 and 302).  There was still a fair bit of foliage and it was a pretty and leisurely drive, taking about two hours.  We made a brief stop for coffee in North Conway, checked the Cog schedule and continued our drive.  Heading into White Mountain State Park is beautiful and we were able to see much of the Presidential Range spreading in front of us.  I had always wondered what a “Notch” was and learned that it is the deep dip between the mountains.  Crawford Notch is one of the most visible as we made our way to the railway.  Enjoying the drive, and with little traffic, we were at the Cog in no time.

The Cog is a bit pricey, about $70/person, but is so worth the experience.  The railway is the world’s first mountain-climbing cog railway and was invented and built by New Hampshire native Sylvester Marsh, opening in 1869.  The ride up takes about 45 minutes, affording spectacular views of the Presidential Mountain range, even on a cloudy day.  As you climb toward the top, the railway is above the tree line and then above the clouds.

Our day at the top had winds of 55 mph, zero degree temperature, and a bit of snow.  It is hard to stand straight with winds at that speed! 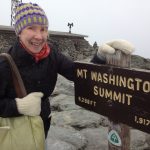 We walked and climbed a bit, taking in the amazing views, despite the clouds.  It was awesome to watch the clouds move in and out and the views change with them.  We were also able to see where the Appalachian Trail passes through the White Mountains, heading toward the end of the trail on Mt. Katahdin in Maine.

Time to leave and head back down the mountain.  Another breathtaking view.  Hard to believe this is all two hours from us in Freeport and that it has taken so long to make it over here!  With a stop in North Conway for a late lunch and a bit of browsing in stores (love the General Store), we were back in Freeport in the early evening.  This was a day to remember and one I highly recommend!