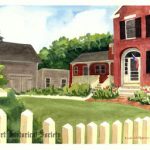 While many know that Freeport, Maine is home to L.L. Bean, few are aware that Freeport was once home of a bustling shoemaking industry.  Opening May 14, 2015 at Freeport Historical Society is a fascinating exhibit, and look into Freeport’s past: “Cobblers to Capitalists: Two Centuries of Freeport Shoemaking.”

Shoemaking was an important industry in Freeport for more than a hundred years beginning with the Davis brothers’ factory on Beech Hill Road in 1872, and ending with the final pair of shoes manufactured in town by Eastland Shoe in 2001. The exhibit will describe the history of shoemaking in Freeport, from the early itinerant cobblers who constructed custom-made shoes at people’s homesteads in the late 18th century, to the late 19th century assembly-line production characterized by a number of people making different shoe parts. Photographs, a number of shoes, early Bean boots, cobblers’ benches, hand tools, sewing machines, and other items related to the shoe industry will be highlighted. 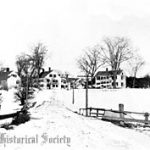 The steam-powered mechanization that began in Freeport Village in the 1880s led to the building of a number of large factories operated primarily by the Davis Brothers, the Cushings, H. P. Dennison, A.W. Shaw, and Cumberland Shoe, and later Lenox, Freeport Shoe, Small-Abbott, E.E. Taylor, Free-Moc, and Eastland Shoe. The railroad that went through the village beginning in 1849, as well as the shipping ports at Porter’s Landing and South Freeport, enabled major development of the shoe industry in Freeport since products could easily be transported to other locations. Over the course of 100 years about 30 different companies, both locally-based and from Portland and Boston, made shoes in Freeport.